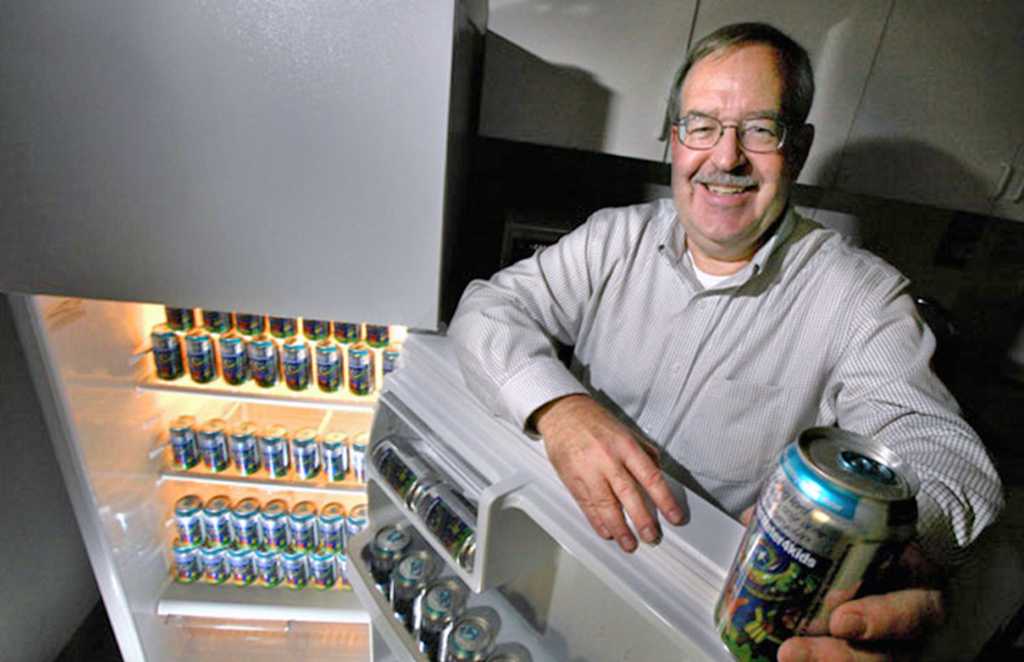 The beverage of human kindness

By John Schmid of the Journal Sentinel

His infatuation began in 1970, when Milwaukee was a beer-brewing city without peer and Stromberg got his first job at the Continental Can Co. A decade later, when aeronautical engineers in Berkeley, Calif., sliced off the top third of a 12-ounce can and discovered a cylindrical airfoil that a person could throw nearly the length of a football field, he licensed the patent and manufactured “the amazing flying can.”

More recently, Stromberg found a new use for the humble can. If it works, it’ll fund projects to purify water for children in developing nations.

It’s called CannedWater4kids. In a nation with a seemingly insatiable thirst for bottled water, Stromberg believes he can sell sparkling mineral water in festive cans that tell buyers their purchase helps “to bring clean, safe water to children everywhere.”

For now, he sells 24 cans on the Internet for about $38, including shipping, which comes to $1.60 per can. A few orders have trickled in during the first month that Stromberg began marketing online. He still has 8,200 cans stacked on pallets in the warehouse of his north side company, INX International Ink Co., which custom-blends inks to print on metal cans.

And his overhead for the venture is tiny – the spring water itself is the only significant cost because the cans came cheap and Stromberg and others are volunteering their time. He promises to channel 91 cents of every dollar of revenue toward clean-water causes. The first few hundred dollars have gone to a handful of projects, including a payment earmarked for a community well in a developing nation, under a program run by the United Nations High Commissioner for Refugees.

A Water Economy
If beer once defined Milwaukee’s economy, many in the region today are pinning their hopes on an economic boom from water.

Politicians and business groups have rallied behind the cluster of water-technology companies that build systems to clean and conserve water. With demand for clean water bound to grow, they want to brand metro Milwaukee as a hub of water technology.

While civic leaders see an economic growth strategy, Stromberg says his charity is tied to the same economics. The fastest growing demand for water-engineering projects, he notes, comes from developing nations where water scarcity and pollution are most dire.

Stromberg got the idea last year at an industry trade show called the Canmaker Summit. Someone had invited a United Nations activist, who hijacked the agenda with a speech about developing nations that seldom have the first-world packaging to keep food and drinks fresh. Disease, as a result, is rampant.

More than 1 billion people – nearly one-fifth of the world’s population – lack access to safe drinking water, according to the most recent U.N. World Water Development Report. As a result, adds the World Health Organization, a child dies every eight seconds from drinking dirty water.

“It’s kind of like genocide, isn’t it,” said Stromberg, with no excuses for the hyperbole.

Instead of tap water, CannedWater4kids relies on spring water from an underground glacier in Cold Spring, Minn., with cans produced in La Crosse. The aluminum can is easily recycled and can serve as “our poster child and billboard for creating awareness and publicity for our cause,” Stromberg said.

“Your support will help us solve the world’s clean water crisis,” the can declares.

Fascination With Cans
He freely admits that his fascination with cans borders on the eccentric.

“I’ve been in cans all my life,” the 60-year-old says. “I hope this will become my full-time work and legacy.”

In the early 1980s, he learned about the Berkeley engineers who discovered the unlikely aerodynamic properties of the aluminum can. They used a can opener to remove the top and sliced through the can to create a stubby and ultra-lightweight tube with a near perfect lift-to-drag ratio. The record distance is 283 feet. Stromberg calls it the Toobee.

In a wide-open office room, he instructs a visitor to throw it like a football, with spin on the release. The Toobee whizzed like a Frisbee over a cubicle farm and banked off the rear wall. Years ago, he wanted to the Toobee to compete with Frisbees and channel Toobee sales to fund other charities. But Toobee sales never quite took off.

That left thousands of Toobees in his garage, basement and attic. “My wife is one of the few people who isn’t very fond of the Toobees,” he said. Starting this Christmas, he’s giving them away for free. He has shipped them by the hundreds to local schools.

But he still takes pains to explain why he uses a fat little bumblebee as the marketing symbol for a flying aluminum can. It comes from another quote he’s heard: